These are domesticated social bees that pollinate our crops and provide us with honey. Honeybees are not native to North America; they were imported from Europe. There are ten species of honeybees worldwide.

Honeybees have large and well organized hives with a distinct social structure. Some domesticated hives have over 80,000 bees! Each worker bee (all workers are female) has specific tasks to complete. Honeybees are the superstar of the bee kingdom; mainly because we humans love honey. 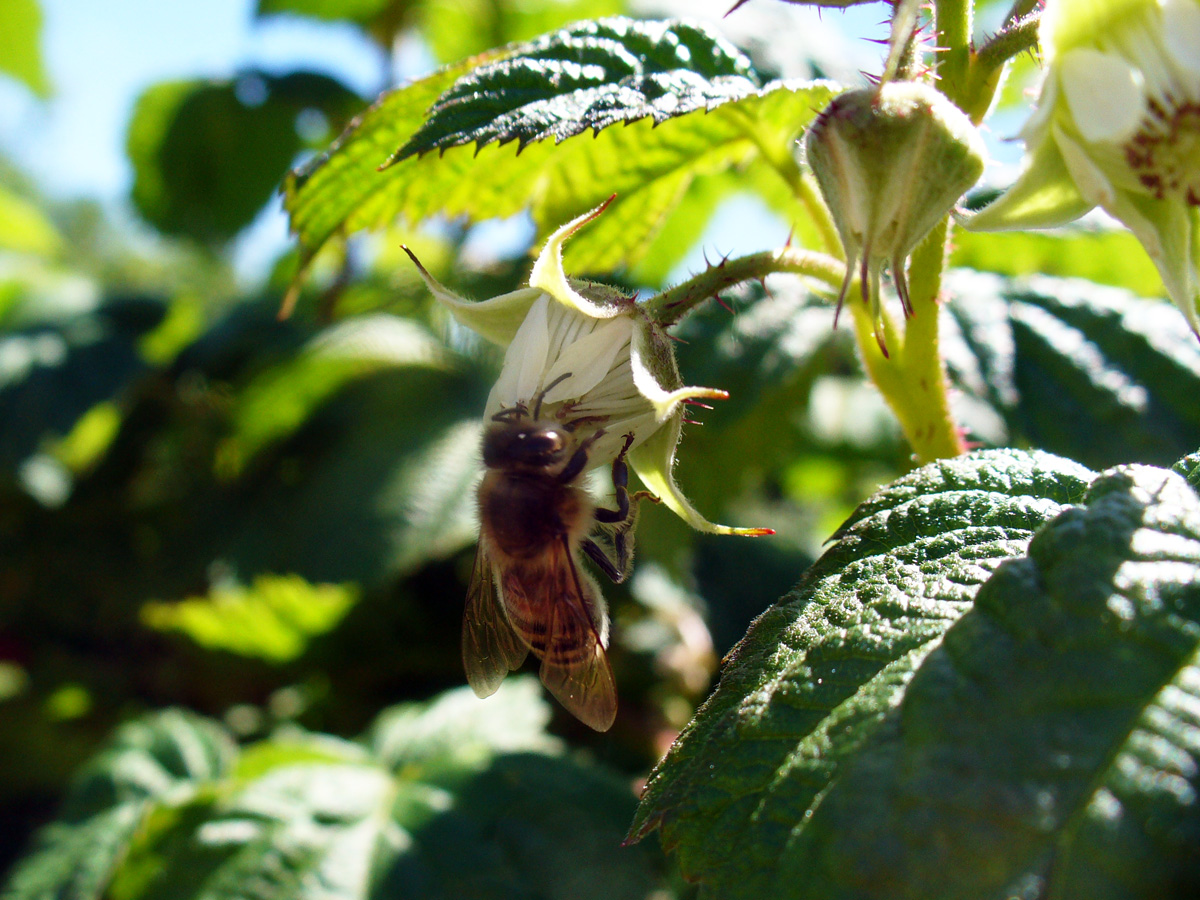 There are three types of bees; queens, drones and workers.

The queen bee is bigger than the other female honeybees. There is only one queen per hive and her mission in life is to lay eggs. She can lay over 1,500 eggs per day. Unlike other honeybees the queen can use her stinger more than once (it is good to be queen).

Queen bees are made by feeding bee larvae royal jelly through out her larval development. Royal jelly is high in protein. Other larvae only get royal jelly the first 2 days after hatching. Queens produce pheromones that unites the bee tribe socially under her rule.

Drones are male bees whose sole purpose in life is to loaf around and mate with a new queen. Drones have large eyes to help them keep their eyes on the queen during their mating or nuptial flight. These male bees are fed by the worker bees. To avoid wasting food on drones during the winter, the worker bees drive them out of the hive in the fall. This is pretty easy to do since male bees have no stinger.

Worker bees are all sterile females. As young adults worker bees are known as 'house bees' and take care of hive cleaning, comb construction, baby-sitting, regulating the hive temperature, meeting the queen's every wish and defending the hive from intruders.

When a house bee gets older she is promoted to field bee. Field bees forage outside the hive for nectar, pollen, water and plant resins used to make the hive. Worker bees have an extra stomach to carry honey or nectar, a pollen basket made of specialize hair on their legs to carry pollen, and special glands on their stomach that secrete beeswax.

Bees make a honeycomb which consists of hexagons cells made of beeswax. Honeycomb is a useful structure that is used to store pollen, make honey from nectar, ferment beebread and raise baby bees. When honeycomb is used as a brood comb, the queen lays eggs in the comb.

In human made hives a 'queen excluder' is used in the hive to prevent the larger queen from reaching some of the honeycomb. No eggs are laid in this honeycomb and it is used to store honey for food for bees or humans. Bees do not hibernate and they need stored food to eat during winter.